Bayagototh is a mysterious character in Lost In Vivo.

Bayagototh does not seem to play a large role in the story, though they are directly involved in the Nightmare Ending and the fate of the surface world during it.

Beyond this, Bayagototh's intentions are unknown, potentially inconceivable, and likely incredibly malevolent.

Cass-3 is a cassette tape mentioned in a Note by Dr. G.L.A, found in Lab 2A along with Lost Tape 3. The similarities in the number and connections to Bayagototh heavily imply that the Note is referring to Lost Tape 3.

This tape may be the tape that gave Dr. Piccinini the idea of Sotiris.

Subject Cass-3 was originally found in the wreckage of a collapsed farmhouse by a mountain survey team. It was later brought to government attention after most of the crew went missing and then granted to our lab for testing.

It appears like a normal cassette tape but has some major differences. Spectrogram displays of the audio contained do not seem to match the structure or waveform of the actual sound but rather several images of american animal, life, and trees.

Some researchers who spent significant time listening to the subject have been hospitalized for mental reasons often becoming obsessed with a fictional being known as Bayagototh.

Bayagototh appears in a locked room in The Last Area as a tree with a large, protruding slab of meat. It asks for a sacrifice, which requires the Child's Skull obtained from The Siren. Upon giving it the skull, the secret Nightmare Ending will be unlocked.

Bayagototh makes an appearance in Lost Tape 3 in the form of a tall elk, while you do not see the elk you can see its eyes staring at you from the top of the forest

A manifestation of Bayagototh appears as a secret boss, summoned by getting 30 silver coins and ringing the bell many times. It is called "Mirage of Bayagototh the Starving Old One" (Starving Bayagototh in the Gallery of Light) and looks like a large mass of dead wood formed into a face, with a large brain in the center. It has a much larger amount of health than Shoggoth King eel of the Abyss and spawns somewhere in the main play area, rather than the arena.

The Gallery of Light

Bayagototh's form from The Last Area can be found in the left room, next to the idol from Lost Tape 3. The wall behind Bayagototh is fake, and can be walked through to find a room holding Starving Bayagototh and a Dead Soul from the Midnight Mode.

Against the left wall towards the back of Starving Bayagototh's room is another fake wall, leading to The Wolf's room, where its head will turn to follow the player. In the back left corner, a baby can be found, labeled "The Wolf (Baby)".

Bayagototh has a number of children made from human sacrifices, normally children. it will transform these children into a demigod who are not bound to it, but can not act against it.

Only two Children of Bayagototh have been confirmed; Specimen 8 and The Wolf.

The Wolf is listed as the fifth child of Bayagototh in the Gallery of Light, making it known that there are at least five children, though there may be more.

Outside of Lost In Vivo

Ritual Wails to the Cosmic Tree

This is a band that Kira said in a Tweet worships Bayagototh, obviously still fictional nothing from this band actually appears in game

They have 2 songs on the Soundtrack, but seem to have an entire album called Sacrifice of Sound.

There is a video posted by a Allen Mortem on youtube titled Bayagototh, it came out a few months before the full release of Lost in Vivo and uses the same font as Lost Tape 6 The Wolf.

The video’s has text that flashes on the screen and video of some weird things including trees, and in the background the song Chaos Moon - Of Wrath and Forbidden Wisdom is playing is playing

I swung my hatchet, it hew the bark.

The sap sprang out, red, thick and dark.

It pooled around me, it twisted there.

This life was forfeit, since my birth.

To be food, for Bayagototh

Was my greatest honor, my solemn feat.

It’s roots and jaws and sap

Pulled me into the ground .

And I became just another ring 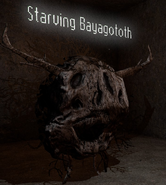 Bayagototh The Starving Old One 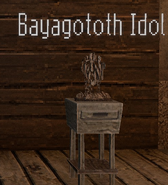 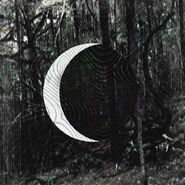 The location where the player can clip through the wall to see Starving Bayagototh.
Add a photo to this gallery
Retrieved from "https://lost-in-vivo.fandom.com/wiki/Bayagototh?oldid=2237"
Community content is available under CC-BY-SA unless otherwise noted.