This page is on the enemy Ghost Girl. For the character, see Jane Exspiraviti.

Ghost Girl is the first real enemy that the player encounters. She resides in the dark parts of the Royal Phantome Subway, when the breaker box is turned off.

Ghost Girl is a floating creature, barely resembling a woman with a deformed face, empty eye sockets, missing nose and little strings of hair hanging from the top of her head. The entire area around her vagina is covered in blood, a pair of goat legs are piercing her stomach and on her chest there seems to be a gunshot wound, but it's not explained why it is there. She also makes a strange looping sound when she's near the player.

The Ghost Girl can only appear in Royal Phantome Subway, when the lights are off. She will appear in a random place in the room that you are in and begin to float towards the player. She can freely go through solid objects and walls, but moves at a slow pace so it is very easy to run away from her. After the player kills the Ghost Girl, she turns into a body bag and after a few seconds will reappear in a random spot. There's no way to permanently kill her.

Description: Ghost Girl will start to shake her head and reach for the player with her arms. Range of this attack is short.

Blocking: Her attacks can be blocked by quickly repeating this action 2 times after the first successful block. Each blocked attack deals 1-2 damage.

Shotgun - Instakill, regardless where she was attacked. 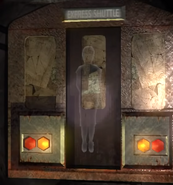 Ghost Girl saving you later in the game. 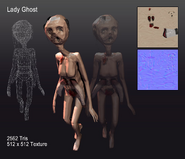 The Ghost girl's textures/model
Add a photo to this gallery
Retrieved from "https://lost-in-vivo.fandom.com/wiki/Ghost_Girl?oldid=1443"
Community content is available under CC-BY-SA unless otherwise noted.