The Ghost Train is one of the enemies encountered in Grand Bulim Avenue.

At first, it appears to be a train car, but when inspected the Protagonist will comment "Something about this train unnerves me." Some time after reading Page 1, the train will come to life and attack.

When the train is attacking the front of it becomes unhinged, acting like a mouth with some parts of it seeming to have teeth on them.

The inside of the train is just flesh which goes all the way to the back of the train which is where you find the spine of this creature.

The train is probably the fastest enemy in the game and can take the most damage compared to most of the enemies, with The Siren probably being stronger. 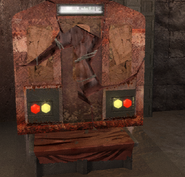 The Ghost Train in the Gallery of Light
Add a photo to this gallery
Retrieved from "https://lost-in-vivo.fandom.com/wiki/Ghost_Train?oldid=1882"
Community content is available under CC-BY-SA unless otherwise noted.