The Cabin takes place in the childhood home of Specimen 8. A secluded two-story cabin in the middle of the woods. It's nighttime, and a heavy rain is pouring outside. The player first starts in the main room of the house.

The player must gather firewood, matches, and the idol, placing them in the furnace in the first room.

The matches can be found on a table with a lit lantern in the room to the immediate left of the player when they start.

The firewood is found outside, directly next to the house. After walking outside, a cutscene plays, showing the forest from the perspective of Bayagototh jumping from tree to tree. A tree in the front yard can be examined, saying "THE TREE IS MOVING WITHOUT ANY WIND"

The idol is found on one of two altars; one is on the first floor, in the back of the house, bathed in green light. The other altar is on the second floor; through the window just behind this altar, a pair of eyes can be seen staring at the player in the distance.

Once the idol is placed in the furnace, the screen distorts, and the tape ends.

There are four ghosts in The Cabin.

HAVE TO PRAY TO IT 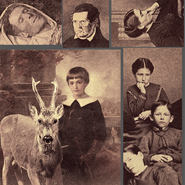 The Cabin's family portrait
Add a photo to this gallery

Retrieved from "https://lost-in-vivo.fandom.com/wiki/Lost_Tape_3_(The_Cabin)?oldid=1873"
Community content is available under CC-BY-SA unless otherwise noted.