Lost in Vivo has many secrets in it.

The sub games and the main game all at least have one. This is a page that list the secrets.

Secrets that appear in the main game

The Three-Eyed Cat is an NPC that can be found in Save Rooms. It is visually very similar to Akuma Kira's (the developer) online avatar.

The cat can be shot with a gun, or hit with the sledgehammer. When hit, it transports the player into a purple room with eyes opening all around you, shortly triggering the death screen after. 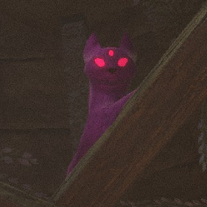 The Maggot Coffin is a coffin filled with maggots that you can find in the third Siren area. It is found behind the orange shutter door with seemingly no way to get inside. If you wait next to the door, you will hear some strange sounds and the door will mysteriously open by itself.

If interacted with, the Maggot Coffin will speak.

This contains spoilers for The Maggot Coffin

"A girl was lost from self-image and doubt."

"A boy was lost with paranoia in his hide out."

"Another soul watched them, lost as well."

"They followed down to the 7th hell."

"In the second ring they fought their own fear."

"In the guise of finding their pet most dear."

Opened Maggot Coffin
Add a photo to this gallery

The Pizza Hands are something that can be found at the start of the game when your dog gets dragged away.

Past the eyeless hobo, where your dog gets dragged away, hug the left wall until you enter the room.

Pizza
Add a photo to this gallery

The sign in Nezumi Testing underlines the N in Nezumi and the Esting in Testing to make Nesting.

Sotiris likes to hang out in The Mines.

Demo Crispys which where the enemies from the demo appear in NG+ randomized enemy mode.

A picture of Specimen 8 can be found in the underground part of the Sub Ways, it can also be found in Nezumi Testing 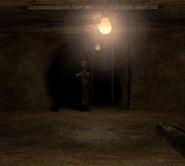 A picture of Specimen 8 found in the subway

The secrets in the original 4 Lost Tapes

Towards the end of tape 3, Specimen 8 from Spooky’s Jumpscare Mansion appears outside the window, facing into the building.

Secrets that you can find in Midnight Mode

Bayagototh shows up in Midnight Mode when the player has 30 coins and rings the bell. He comes with a new model and all. His midnight model can be found in LIT mode behind the other Bayagototh model.

Shoggoth King Eel of the Abyss

While he appears as a boss, the original form of Shoggoth King eel of the Abyss also appears in midnight mode

Add a photo to this gallery

Secrets you can find in The Mersus Tapes

"P: It's something I can't even describe!"

The end text after the moon sequence is over

The Wolf can talk to the player in Tape 5. To enable this secret the player has to find an altar in the woods and interact with it until they hear a scream from Bayagototh. After that the player just has to make their way to the driving section and while The Wolf is attacking you it will say

"There are two of us

but only one shall be fed

The other shall dissolve"

Looking at the altar in the woods

Within Tape 6, if the player walks into the wall opposite their cell door and right of the stairs, they can phase through the wall to enter a yellow building that loops forever.

In the back rooms the player will wander a small looping maze-like map with some Source Engine jokes, buttons, and weird ambiance. Awhile after first entering the area, an unknown player by the name of Rancid Johnny will join the server, will then be made admin, and will proceed to start killing the player's steam friends along with sending the player threatening messages in 'chat'. The player's steam friends will also call for help sometimes. This is all a ruse though, as there is not goal within the backrooms, nor will Rancid Johnny or any other player ever actually appear.

A button in The Backrooms

Rancid Johnny being made admin

Retrieved from "https://lost-in-vivo.fandom.com/wiki/Secrets?oldid=2233"
Community content is available under CC-BY-SA unless otherwise noted.