Dani, the dog, appears to be a female Corgi with brown fur and white undertones. She also appears to be a service animal for the player. Finding her is the main objective of the game.

In certain areas, the player can whistle in order to locate her.

After starting the game, The Protagonist is shown walking Dani when a storm hits. Dani is washed down a storm drain, forcing the player to delve into the sewers to save her.

Dani is later seen after the player encounters The Eyeless Hobo. She is then dragged by an unseen force through a hole, demanding the player progress further into the sewers. She is seen again in the subway, unwillingly leaving on a train with Virgil. She is seen then in the laboratory, where she is washed away again when the player opens a flood gate to escape.

The dog's collar, denoting it's name. 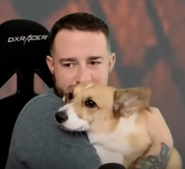 Dani's steam card.
Add a photo to this gallery
Retrieved from "https://lost-in-vivo.fandom.com/wiki/The_Dog_(Dani)?oldid=1967"
Community content is available under CC-BY-SA unless otherwise noted.