Virgil is a enigmatic character in Lost in Vivo. Their purpose and motivations are unknown, but it has been speculated Virgil is some kind of angel confronting the protagonist with their own demons.

They appear as a genderless, gray-skinned human holy garbs, bearing a resemblance to the statue found in Save Stations. They have buzzed hair and glowing yellow eyes.

Virgil is only encountered twice in the entirety of the game.

Firstly, they're seen in the subway with the Dog, inside the train while it leaves the station.

Secondly, they're seen in Area 1, summoning The Siren from the hole where the player must go through to reach the game's endings.

The name Virgil is a reference to Dante's Inferno, in which the poet Virgil is tasked with guiding Dante through the many layers of Hell. This supports the idea that Virgil is malevolent to The Protagonist, and only serves to "guide" them through the psychological trial of Vivo.

Virgil taking your dog in the subway 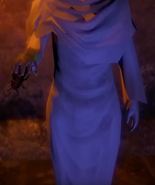 Virgil and their Angel Statue counterpart in The Light Gallery
Add a photo to this gallery
Retrieved from "https://lost-in-vivo.fandom.com/wiki/Virgil?oldid=1314"
Community content is available under CC-BY-SA unless otherwise noted.